The one minute case for jury nullification 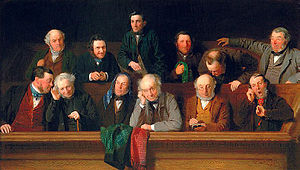 A trial ought to be, a fact-finding process, conducted in order to determine whether pre-existing legal principles are applicable to a specific case.  It should not be a religious, philosophical, or political discourse – that is, the rules by which guilt or responsibility is determined must be known beforehand.  It is not up to the judge or jury to determine what the law ought to be, only to apply it to the established facts.  If the law was determined rather than applied at trial, it would be impossible for anyone to obey it.  Furthermore, a just legal system should be uniform – people must have assurance that outcomes will not depend on the particular judge and juror they stand before.

However, while it is not the job of the juror to determine whether the law is just, it is his moral responsibility to treat other men justly.  Someone who is hired to be a repo agent may not have a contractual obligation to determine whether the collateral he collects is for debts which are legitimately are in default, but he has a moral obligation to refuse his assignments if he suspects that he’s seizing legitimate property.  If he refuses assignments based on tenuous grounds, he may justly be fired, but if he has some certainty that he’s seizing legitimate property, he becomes as much a thief as his employer.  Likewise with the juror.

A law based on invalid principles is inherently unjust

One criticism of jury nullification is that a jury is not neither qualified to judge the law nor does it have any legitimacy in doing so.  And this is certainly true as a matter of law.  A juror who disagrees with the practical implementation of the moral principles behind a law ought to defer to the established process.  He can always exercise his disagreement and try to effect change in his role as a private citizen.

But, the situation is different when a juror disagrees with the moral principles behind a law.  A law based on incorrect moral principles is unjust regardless of the facts of the case.  The conviction of anyone based on such as law is necessarily an act of aggression.  Any participation in the process, even solely in the function of determining the facts, is an immoral act.  No judge can honestly ask a juror to breach his integrity, or blame him for refusing to do so.    Everyone, regardless of his role, has a personal moral obligation to treat others justly and refrain from willingly participating in injustice.

What should  a juror do if he objects to the morality of a law?  He should refuse to serve if he believes that the principles of a law are inherently unjust.  By doing so, he does not undermine the legal process, since another juror can be substituted, nor does he violate his own integrity.  A juror exceeds his role if he refuses to convict because he thinks that the punishment for an action is too harsh, but he acts properly if he refuses to serve because he does not believe the act being prosecuted to constitute an act of coercion at all.

If the court is unable to find enough jurors who accept the morality of the law, it has two choices:  either require the charges to be dropped, or offer the dissenting jurors to serve anyway.  If they do so, they cannot be blamed for acquitting the defendant based on their judgment of the law, in addition to their judgment of the facts. If laws are consistent with the basic moral principles of citizens, it should not be difficult to find sufficient jurors.

What is the problem?

The growing use of non-lethal weapons such as tasers by the police has to calls to ban or restrict their use. The real issue being debated is the extent to which police officers should risk their safety to detain suspects. Should they only use force when someone’s life is in danger, or to avoid the risk of injury when attempting to tackle a suspect, or to avoid a sprain from having to run after someone? It is likely that further debate will result in a consensus enforced by the legislative and judicial branches of government. But what criteria should be used to determine the level of risk that police officers may be exposed to before using force?

Under the current system, police officers are only held responsible for injuring others only if found guilty of a miscarriage of justice, that is, willful malice or negligent behavior in the performance of their job. This provides an incentive for the judicial branch to minimize liability by maximizing the leeway officers have in deciding whether to use force. Furthermore, establishing standards for proper police procedure is a highly-non objective process, based on factors such as the public’s fear of police brutality, their desire for safety, the cost of lawsuits from police actions, and the political gain politicians find from pushing more or less draconian policies. One means of improving on this process is to establish a strict liability criteria for police actions.

What is strict liability?

Under a strict liability standard, it is not necessary to find a party guilty of malice or negligence, only of fault. Perpetrators of damages arising from inherently dangerous activities are responsible for damages regardless of whether they acted improperly. For instance, drivers at fault for damaging another car or injuring a driver are held financially responsible regardless of whether they acted maliciously or negligently. Under strict liability, a police agency would be held responsible for personal injury and property damage if an officer injures an innocent suspect, or unnecessarily injures a criminal — even if the officer acted properly in the performance of his duty. For example, an officer who fires at a guilty suspect who poses a real threat would not be liable, but an officer who fires at a suspect who does not pose a threat will be held liable for damages whether the officer is guilty of a miscarriage of duty or simply made an error in judgment. Furthermore, such a system would repay defendants who are exonerated at trial for their time and suffering.

One objection to the strict liability standard is that it would greatly increase the financial risk faced by police departments and courts. However, by placing the burden of minimizing costs on the judicial agency, a strong incentive is created to minimize mistakes – and therefore costs. It is likely that police departments would attempt to insure themselves against risk, and the insurance agents would in turn establish guidelines that seek to minimize their risk. Such guidelines may ban tasers because of their health dangers – or they may require them in most situations where deadly weapons were formerly employed. Police agencies may prefer to hire men because they would find it easier to tackle suspects (and thus avoid a major incentive for taser use) or women because they are better at resolving conflicts peacefully. Because they would bear the cost of mistakes, police agencies would be motivated to experiment on the most effective way to perform their jobs, while the public they protect would be financially shielded from their mistakes by a strict liability standard.

Another objection to strict liability under the current legal framework is that it would make police agencies averse to enforcing laws that are prone to mistakes or unsuccessful prosecutions – namely, those known as “victimless crimes.” Adultery, gambling, homosexuality, and the trade of illicit substances and goods are areas where the lack of a victim makes errors in suspect identification and successful prosecutions especially likely. This is especially true of laws pushed by vocal voters on unwilling recipients – for example, communities that favor drug or alcohol prohibition on communities that tolerate drug and alcohol users. Yet this only illustrates the insulation of government policies (and by extension taxpayers) from the cost of economically expensive (and thus socially destructive) laws. If enforcement agencies are required to pay for their mistakes, they will favor laws that can be objectively enforced, and violations of which result in victims pushing for enforcement.

The One Minute Case Against Mandatory Seatbelt Laws

Driver safety is not a special prerogative of the state

Seat belt laws are enforced “for our own good.” But traffic accidents are not leading causes of injury and death, nor is buckling seatbelts the most beneficial thing you can do for your health. Daily exercise, nutritious meals, intellectual enrichment, and regular sexual activity have all been shown to have a positive impact on mind and body. The issue is not whether seatbelts are beneficial, but whether the state has the right to coerce us for our own good.

The Thirteenth Amendment to the United States Constitution officially prohibited the ownership of another human being. To own something is to exclusively control and use it for one’s own purposes. We recognize that control is ownership, even when property nominally belongs to another party. Thus, under the regime of the National Socialist German Workers Party, industry belonged neither to the original owners, nor to the workers, but to the Nazi party, and in the Soviet Union it belonged to the Communist Party, not “the people.” Joseph Goebbels, Hitler’s chief propagandist, explained it thus: “To be a socialist, is to submit the I to the thou; socialism is sacrificing the individual to the whole.” If the state controls every aspect of the individual’s life for the “common good,” then individuals become property of the state.

Common sense indicates that individuals are more likely to be concerned with their safety than politicians. Even when they aren’t, safety laws may have a counterproductive effect. According to studies cited by the Independence Institute,

When subjects who normally did not wear seat belts were asked to do so, they were observed to drive faster, followed more closely, and braked later. In other words, people who are naturally cautious voluntarily choose to wear seat belts, and voluntarily drive safely. When reckless people are forced to wear seat belts, they “compensate” for the increased safety by driving more recklessly. Furthermore, no jurisdiction that has passed a seat belt law has shown evidence of a reduction in road accident death.

Externalized healthcare costs are only a problem under socialism

Those who support outlawing risky behavior argue about the “social costs” of medical treatment for accidents. But this is only a problem for a socialist state. In a free society, a person is injured due to their own recklessness is responsible for their own treatment. However, in a socialist economy, everyone is responsible for paying for everyone else’s health. It’s not a coincidence that advocates of seatbelt laws are supporters of socialized healthcare as well.

“Click it or Ticket” is a step towards totalitarianism

There is no logical end to laws that replace individual judgment with politically-mandated notions of what risks we are and are not allowed to take. If it desirable to the state to control individuals while driving, eating, working, and seeing the doctor, it follows that the state should regulate every other aspect of their lives as well. Without a principled and uncompromising defense of the individual’s right to own his life, we are reduced to being property of the omnipotent State, being permitted to live only at the mercy of a bureaucrat’s decision that we contribute to the “common good.”